Will the PCE deflator have the last word in August? - Butler Financial, LTD
Skip to content
12 Wishes for the New Year
Learn more

This week’s headline inflation, or headline consumer price index (CPI), number was very disappointing, but not because it was too high. It was actually very low. The reason it was disappointing was because it was not low enough. And the reason why it was not low enough was the most concerning data point within the release because we run, potentially, the risk for inflation to continue to increase if we happen to suffer another energy related shock in the coming months and quarters. Still, barring another shock, we believe inflation will continue to trend down.

Core CPI prices, which are prices excluding volatile food and energy components, are growing too fast to guarantee that inflation would continue to go down in the coming months and quarters if there is a rebound in energy prices. One of the distinguishing—and worrisome—features of this inflation episode is that core CPI prices have been moving higher compared to previous relatively high inflation periods. As the graph below shows, core CPI has remained very low since the mid-1990 even during periods when the headline number increased considerably, like in the early 2000’s, from 2004 to 2006, and from 2007 to 2008, just to give some examples. 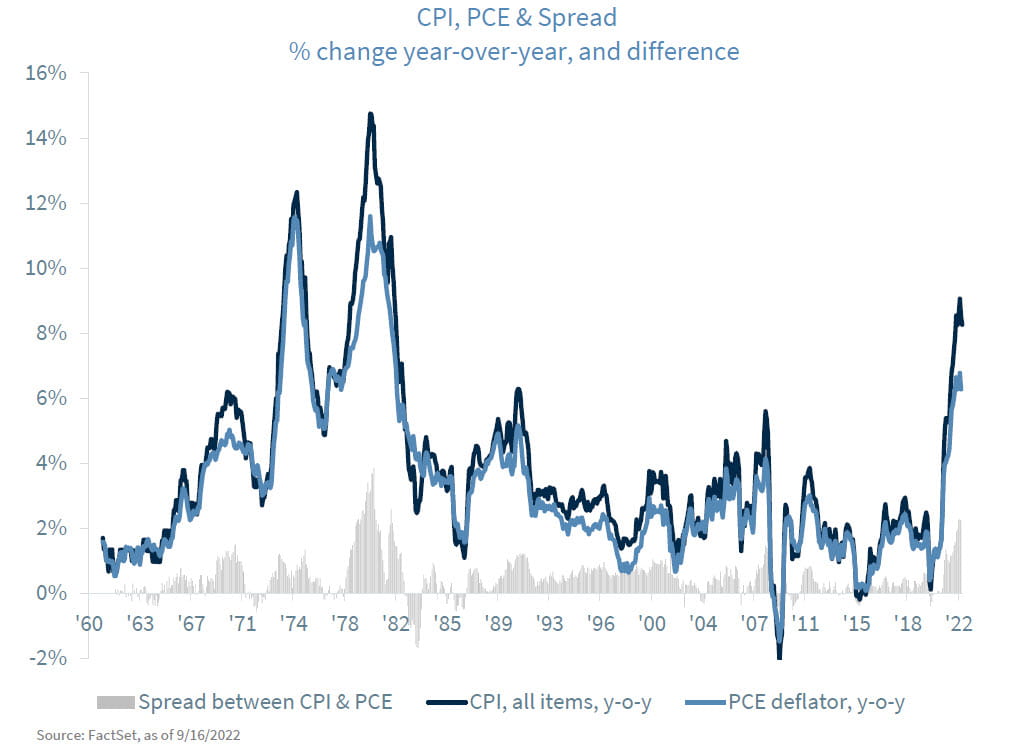 However, CPI prices are not as important for the Federal Reserve (Fed) as the Fed does not target CPI for conducting monetary policy. However, since CPI comes in first, news media and analysts are used to taking this number as the most important in terms of inflation. However, the most important inflation indicators for the Fed are the overall PCE deflator and the core PCE deflator, which are going to be released on September 30. This report will give a better picture of what is really happening to inflation (for more details on the difference see our section on “Thoughts on the Market” released on September 13, 2022).

In general, and with few historical exceptions, the higher CPI inflation is, the larger is the spread between the CPI and PCE deflator. And today is no exception. The spread between the year-over-year CPI and PCE in July of this year (July is the latest available PCE deflator number) was 2.25 percentage points, one of the highest since a spread of 2.60 percentage points in September of 1981. This means that the higher the rate of CPI inflation is, the higher is the probability that Americans continue to shift away from more expensive goods and select cheaper alternatives, putting an upper bound on prices.

Furthermore, we also got another number this week that garnered less attention than the CPI report. This was the report on the producer price index (PPI) for final demand, which came in at -0.1% in August after a decline of 0.4% during the month of July. And this was very important because the year over year PPI for final demand went down from 9.85% in July to 8.72% in August while the PPI for final demand less foods and energy declined from 8.37% in July to 7.26% in August (see graph below). This means that, barring any shock to energy and food prices in the future, inflation at the consumer level will continue to trend down. 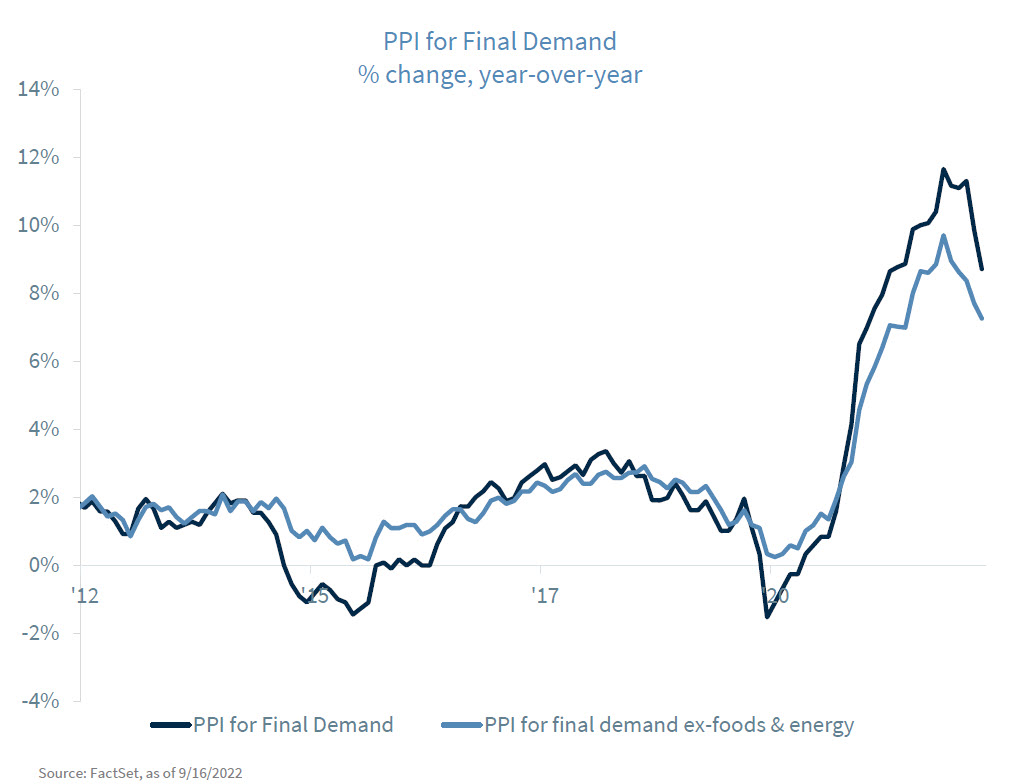 The reason for this is that these three measures of inflation have been highly correlated over time, with the PCE having a 98.4% correlation to CPI and a 97.4% correlation with PPI since after the Great Recession.

But there was more news that was overshadowed by the higher-than-expected CPI report. The survey of consumer expectations from the New York Federal Reserve was also released and showed further improvement in all measures of inflation expectations, one-year, three-year, as well as five-year. 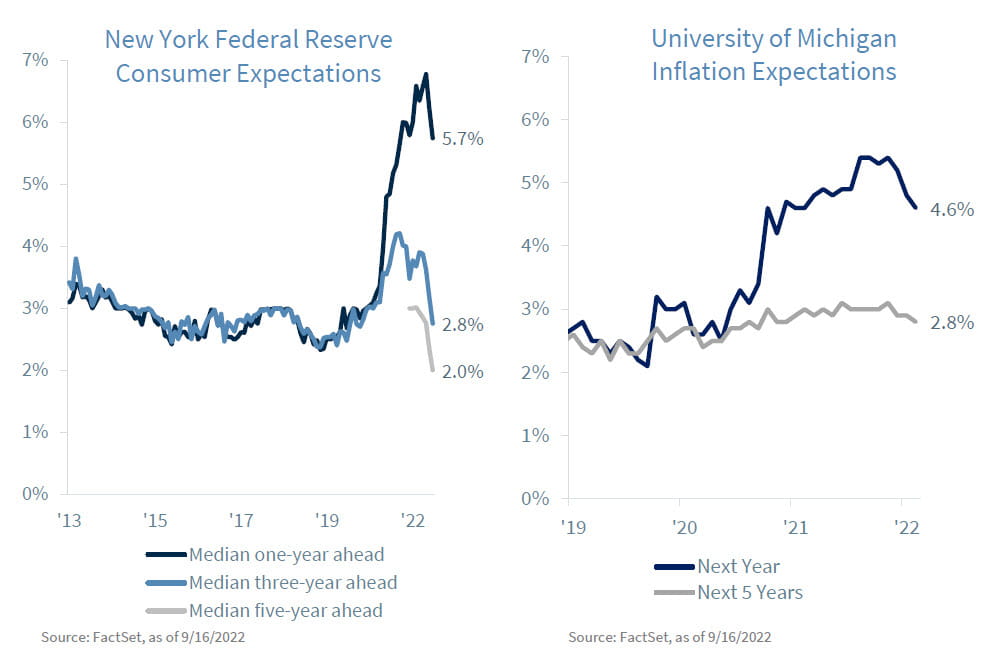 This means that Fed officials should take these expectations into consideration during their decision- making process as the current environment is nothing compared to what was happening back in the 60s, 70s, and 80s, when inflation expectations were running wild, and the Fed needed to take drastic measures to bring those inflation expectations down. For now, what they have done seems to be enough to bring inflation down to their 2.0% target.

Below, we provide two tables of different scenarios for both, the PCE deflator and the CPI over the next year so we can see how inflation is going to evolve according to these scenarios. Of course, these scenarios assume that inflation will be the same for each month so it is an oversimplification. However, it gives an idea of what are the monthly rates of inflation that will allow the Fed to get to the 2.0% target for the PCE deflator. 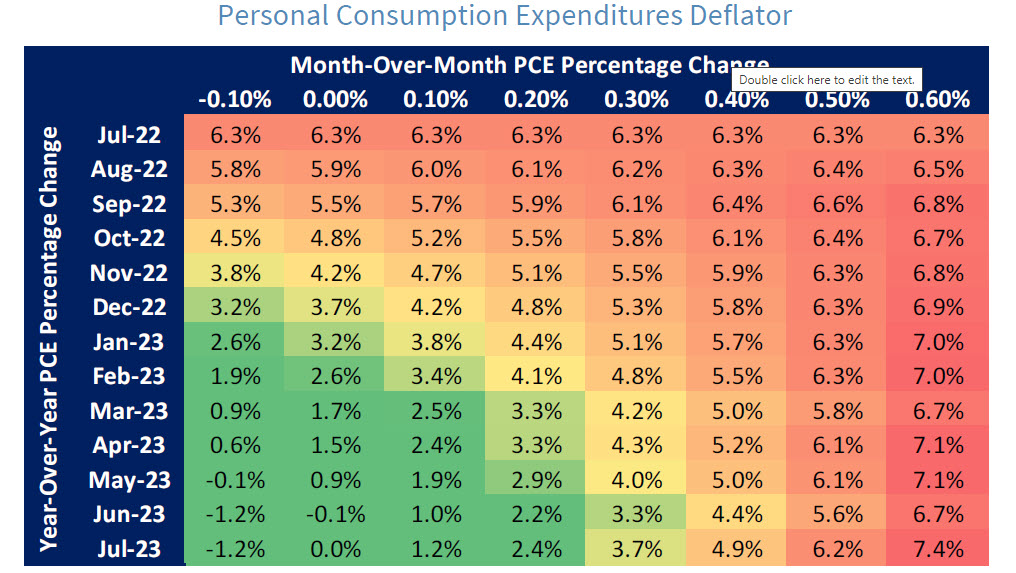 We Have Revised Our Forecast

We remain on the camp that believes that inflation will continue to slow down going forward and that the Fed will not have to increase interest rates past 4.0% but right now the camp that believes we need a deeper recession to bring the rate of unemployment considerably higher seems to have the upper hand today. However, we still think that our expectations will come through and the Fed will not have to increase the federal funds rate much higher than what we expect today.