Understanding the Fed (or at least trying) - Butler Financial, LTD
Skip to content
12 Wishes for the New Year
Learn more

Over history, it has not been easy for markets to understand the Federal Reserve (Fed) or how the Fed understands its role, even if its two most important mandates, which are very clear, are price stability and low unemployment. At some point in time, during the tenure of Alan Greenspan, the communications from the Fed were so convoluted that analysts/economists would call Fed communications ‘Fedspeak,’ which basically meant that they could not understand a word of what Mr. Greenspan was saying!

However, today is different. The Fed has gotten much better at communicating what its thoughts are today and going forward. The only problem is that the Fed is like the family doctor: you call the doctor because you feel bad, and the doctor prescribes a very nasty medicine and says that you must take it all during the next several weeks.

Today, markets have been calling the doctor because they have an inflation problem. However, the medicine the doctors are recommending is too nasty to take, let alone do it for the next several months or even quarters.

We don’t think markets were surprised by the 75 basis point increase in the federal funds rate decided after the September Federal Open Market Committee (FOMC) meeting earlier this week. The Fed chairman, Jerome Powell and other members have been filling the airways with a more certain view of the path ahead. What happened after the FOMC meeting this week was that the Fed put a price or, as many would say today, ‘monetized,’ what Fed officials have been saying since the Jackson Hole meeting.

And markets did not like this monetization because it means higher interest rates for a longer period and probably a deeper recession than what they had already priced in.

On Deflation, Inflation, Stagflation, and Disinflation

But let’s try to understand why the Fed seems to have changed its mind about the need to move higher and stay higher for longer. First, it believes, and markets have made it clear, that it was behind the curve by not acting immediately to curb inflation after the inflation monster reared its ugly head. However, for an institution that has been fighting deflation for several decades, this is a ‘peccadillo’ that should have been pardoned already, but markets keep blaming the Fed for not acting on it.

Second, it has been hearing some analysts/economists throwing the word ‘stagflation’ out without any regard for the insurmountable differences that exist today compared to the 1960s, 70s, and 80s (See our Weekly Economics for June 10, 2022). If the Fed had bad policies that tended to perpetuate higher inflation for longer, what do we say about the bad, bad, even atrocious (political) policies pushed during the 1970s that worsened the effects of inflation and created a perfect storm for stagflation to take hold? Not saying that some of today’s policies are great, but nothing compared to what was happening then. 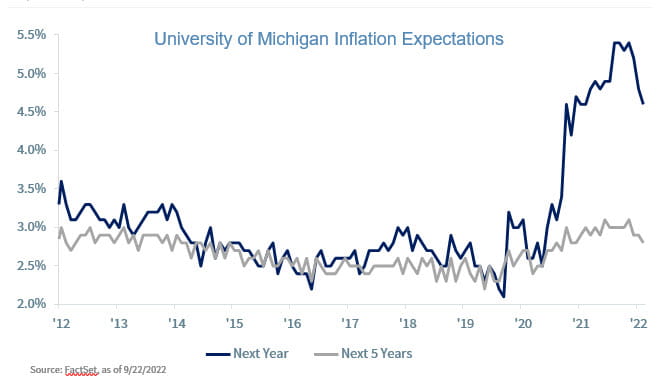 Thus, the Fed doesn’t want to risk it and be accused of being soft on inflation as was the case with its colleagues of the stagflation period. That is, Powell and company don’t want to act as the Fed did during the 1960s, 70s, and early 80s and allow inflation to get the upper hand. It just wants markets to take the medicine in full rather than allow the ‘infection,’ i.e., inflation, to come back again and with greater force. And you cannot blame it for not wanting to be compared to those folks. 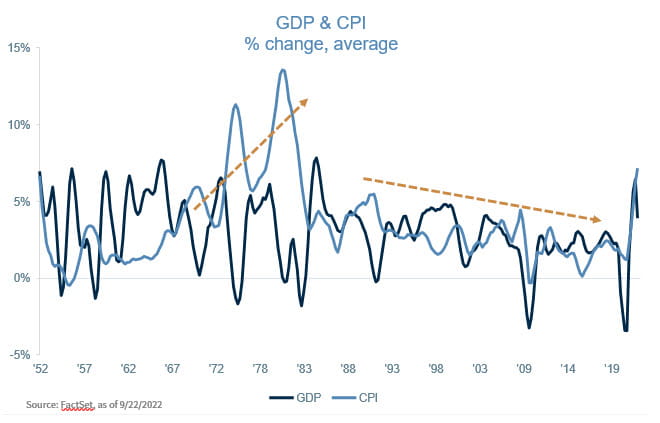 Third, the Fed, as well as many analysts/economists, were expecting inflation to start turning the corner at the end of the first quarter of this year (yes, this was the ‘transitory’ argument) but a new and unexpected external shock changed the timing for inflation to start coming down: the Russia/Ukraine war. Thus, the Fed doesn’t want another potential external shock to further undermine its inflation fighting credibility and has decided that this time around, it is not waiting for things to happen on their own, and it is ok with increasing interest rates further and pushing the US economy into a recession.

Fourth, because of all this, the Fed is expecting inflation to come down at a slower pace than what it was expecting before through a process that is called disinflation. And it is betting the house on its success. This is the reason why the strategy has changed to ‘higher for longer.’ The Fed has put out its worst-case scenario, something that should be music to the markets’ ears.

For the markets, this should be good news even if it is very difficult to see it at this point. Since this is the worst-case scenario for the Fed, any ‘better-than-expected’ news in the inflation front should be a boon for markets.