The Federal Reserve has a long way to go - Butler Financial, LTD
Skip to content
12 Wishes for the New Year
Learn more

We are in the camp that what the Federal Reserve (Fed) has done and is expected to do with interest rates until the end of this year will be enough to weaken economic activity so that the path for inflation down the road will enable it to achieve its 2% inflation target. And we have argued that the Fed needs to be patient and not rush into increasing interest rates so much that it sends the U.S. economy into a deep recession.

In this context, today’s strong (but weakening) employment number will add to the Fed’s concern regarding inflation as it sees the tightness in the labor market as another headwind to bringing inflation down. The reason for this is that the almost historically low rate of unemployment, at 3.5%, will keep pressure on firms to increase wages and salaries and this has the potential to keep inflation higher for a longer period of time.

Thus, while today’s employment report was great for economic activity, for the health of the U.S. economy and labor market and for all those who have a job, it was not good news for a Fed that sees these data points as a headwind to bringing down inflation.

The decision by the OPEC+ cartel, which includes the traditional members of OPEC plus other countries, including Russia, to decrease petroleum production by 2 million barrels per day was a big disappointment for the global economy as well as for central bankers as they continue to fight inflation and inflation expectations. “Even though the actual supply reduction will be only half as much, this is still the most aggressive move by OPEC+ since the earliest days of the COVID pandemic” says Raymond James Energy Analyst Pavel Molchanov.

After increasing to about $125 per barrel at the start of the Russian invasion of Ukraine, petroleum prices have been coming down on concerns of slower global economic growth. However, for the OPEC+ countries, petroleum price of about $80 dollars per barrel seemed to not be enough and they have decided to boost the price of petroleum by decreasing production.

Many argue that the OPEC+ cartel is just trying to defend the petroleum industry from the threat of countries adapting faster to other technologies that rely less on energy produced by fossil fuels. We have also heard that we cannot ask those that are in industries threatened by the move to newer, and cleaner, energy technologies, to sit tight and accept their demise without putting up a fight. And all these arguments, which we don’t agree with, may have a point. However, progress moves by what the late Austrian economist, Joseph Schumpeter, called “creative destruction.” Creative destruction is described as the “process of industrial mutation that incessantly revolutionizes the economic structure from within, incessantly destroying the old one, incessantly creating a new one.” 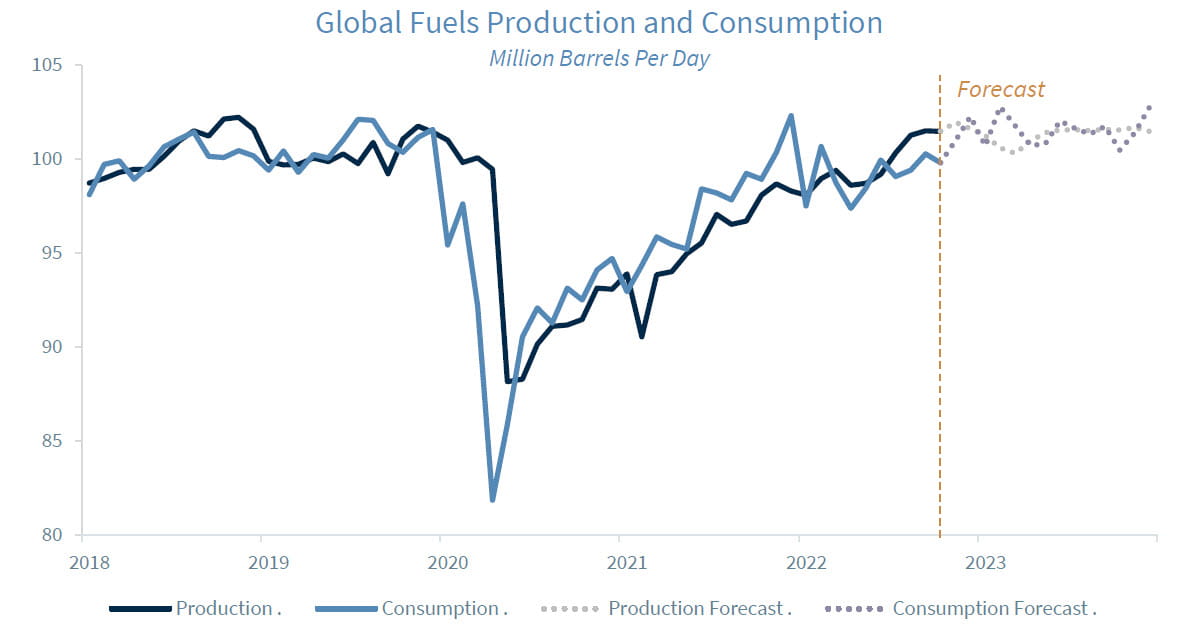 We are not going to get into a discussion of whether this action by the OPEC+ cartel is shortsighted or not (which we think it is) at a time when many countries in the world are moving ‘faster’ to reduce their consumption of oil by increasingly adopting electric vehicles, solar and wind energy, etc., into their energy consumption mix. The fact of the matter is that this is what progress looks like and the fact that new technologies are threatening the existence of older technologies should not be used as a reason for stopping or protecting older technologies’ industries.

When people talk about disappearing industries, we always remind them of the story of the ‘baking soda’ (or sodium bicarbonate) industry and how that industry has been able to recreate itself and ‘push’ the product into multiple uses. Petroleum is not only used for fueling cars, airplanes, and boats, that is, as transportation fuel, it is also used to make products such as plastics and asphalt, so it is going to be very unlikely for the industry to disappear. It will have a lower penetration in transportation fuels over time as the new technologies continue to develop but it will remain a vibrant industry nevertheless, just as the ‘baking soda’ industry did!

The biggest problem with the OPEC+ cartel is … that it is a cartel, and cartels are illegal in the US for good reasons. The main reason is that they artificially control the quantity of a good that is produced in order to set the price of that good. By doing this, they are able to command higher profits for the industry and reduce consumer surplus from the consumer. That is, in layman terms, they increase the price of the good, favoring the companies against the consumer.

But the cartel knows that the higher they set the price, the more incentive there will be for other emerging technologies to erupt and threaten the industry’s ability to increase profits. That is, the higher the price, the more intense and faster the process of creative destruction will become. Thus, the cartel should not blame others for what is clearly their own undoing!