We know that financial markets have already concluded that either the US economy is in a recession or that it is heading toward a recession. The second part of the previous sentence is a misnomer as in some sense, economies are always heading towards a recession. The problem is that nobody knows when. And today’s environment is a typical example of this. Everybody says that we are going toward a recession (or are in one) and everybody is trying to position themselves to be ‘correct.’ Sometimes I liken recession calls by analysts and economists to hurricane calls or election calls by TV stations: everybody wants to be there first!

There is a lot of commentary going around on the correct definition of recession. The layman’s definition and one that almost everybody talks about is the one that says that we need two consecutive negative readings on GDP growth. Many are saying that since the economy declined 1.6% in the first quarter and the Atlanta Fed’s GDPNow is showing negative growth of 1.9% in the second quarter, this means that the US economy is already in a recession.

However, the NBER, which is the official body that calls recessions in the US defines a recession more broadly: The NBER’s traditional definition of a recession is that it is a “significant decline in economic activity that is spread across the economy and that lasts more than a few months.”

If the above is the definition of a recession and we agree that the NBER is the institution that calls recessions then there is no chance that the NBER is going to call for a recession today, especially after the April, May, and June employment numbers, which increased by 368,000, 384,000 and 372,000, respectively. It would not matter if we had a second consecutive negative reading of GDP during the second quarter of the year. They cannot call for a recession if the above is their definition of a recession!

And this is the reason why today’s employment numbers are so illustrative of the argument for no recession, at least not yet. A recession is “a significant decline in economic activity that is spread across the economy and that lasts more than a few months” but what the employment number showed today is that there is no broad-based significant decline in economic activity in the US economy.

In fact, analysts, economists, and the financial market do not determine the state of the US economy. Firms are the one determining the state of the economy. If consumers continue to consume in their businesses, they are going to keep hiring people to service those consumers. So far, there are no signs that the slowdown in consumer demand has affected firms’ decisions to hire workers. Thus, after that occurs, it does not matter what analysts, economists, or the financial markets conclude about the state of the US economy. What matters is what is happening on the ground and what firms are doing.

Earlier in March this year, the 2/10-year curve inverted for the first time since 2019, as short-term US government debt (such as the 2-year) rose quickly due to higher rate hike expectations by the Fed to control inflation. On Tuesday of this week, the US 2-year Treasury closed at 2.82 while the US 10-year Treasury declined to a closing price of 2.81, effectively inverting the curve for the second time this year. At the time of this writing, the curve is still inverted by ~3 basis points.

Why is this important? Looking back at history, almost every time since 1978, except for 1998 (when the 2/10-year curve briefly inverted for one day) a recession has followed within three years of the inversion. However, the reason why the yield curve inverted this week is because future expectations of economic growth have been declining, and investors flocked to the longer end of the Treasury yield curve, pushing the US 10-year Treasury bond lower by ~60 bps in just a few weeks. However, while the US 2/10-year yield curve is the most watched by the market, other yield curves are also watched by investors. Curves for the 3- month/10-year or the 3-month/30-year are a case in point, and both are far from inverting. Therefore, while historically concerning, we should take this inversion with a grain of salt. 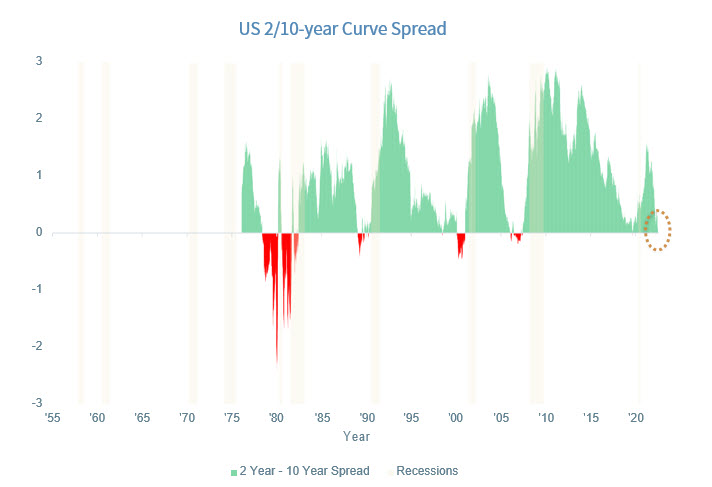 The Fed’s decision: nothing changes

The June employment report is probably not going to change the Fed’s decision to move the federal funds rate higher by another 75 basis points during its late July FOMC meeting, especially because consensus expectations are calling for another large monthly increase in CPI inflation for June. Consensus expectations for CPI are for a 1.0% increase once again. Our forecast is for a little bit less than that, up only 0.6%, but we agree that the risks are on the upside, especially because oil prices and gasoline prices were very high at the beginning of June.

After that meeting, the Fed has a one-month hiatus to see what happens to the July and August inflation numbers and then meet for its next FOMC meeting on September 20-21. At that time, it will have a better picture of the jobs market, the economy, and inflation and then it will decide what to do next.