Today’s nonfarm employment number is at odds with what other numbers are showing regarding the health of the US economy. However, the number of jobs has ‘consistently’ been at odds with the US economy during the whole year. Although GDP numbers for the first and second quarters indicated the US economy was in bad shape, employment numbers told a completely different story. Employment growth was very strong in the first half of the year, increasing by more than 2.7 million jobs or 461,000 average job growth per month, which is not consistent with a poorly performing economy. 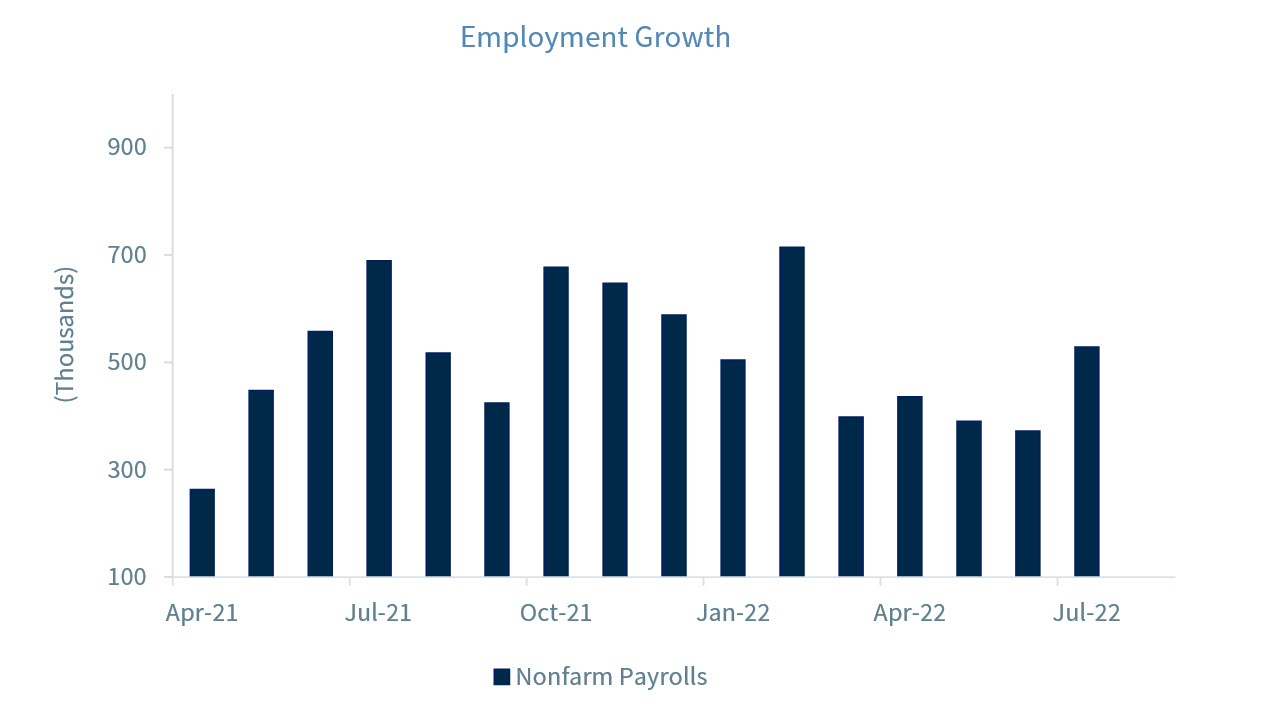 Thus, from this point of view, July’s nonfarm payroll employment increase of 528,000 is not out of line with what has already happened during the first half of the year, it is just a continuation of this new post-Covid environment. And there are no good historical comparisons to what is happening today in terms of economic numbers. When the Spanish flu hit the US and world economy back in the second decade of the 1900s economic data as we know it today was nonexistent and thus it is very difficult to make historical comparisons.

Thus, these are also unchartered times for the Fed (Federal Reserve) as it tries to make sense of what is happening in the US economy. The only thing that is clear for the Fed is that inflation is too high, and it needs to bring it down. However, they need to be clearheaded and figure out the best solution to the problem. Is it employment growth that is keeping inflation higher? Although average hourly earnings were higher than expected in July, up 5.2% on a year earlier basis, real disposable personal incomes have been declining for several months so the Fed should take notice that while the labor market is very strong, real incomes are already coming down and not contributing to higher inflation.

However, as we argued in our Weekly last week, targeting employment growth at this time is not a good strategy for the Fed, especially because GDP numbers are already showing a struggling economy even if those numbers have also been at odds with the growth in employment during the first half of the year. Thus, the Fed knows that the economy is slowing down and that it is a matter of time for inflation to start coming down. However, we should not expect inflation to come down very quickly and thus the Fed needs to be responsive.

The biggest issue today is one of a ‘readjusting’ economy, an economy that relied too much on the goods sector during the pandemic and has been transitioning into a more ‘normal’ economy, one that depends more on the service sector for economic growth. Thus, the strong growth in service sector employment is not a reason to fret about potential upward pressure on inflation going forward. That is, from this point of view, a slowing economy that is contributing to a slowdown in inflation is not inconsistent with a strong job market and the Fed should be able to keep its cool when considering its upcoming interest rate increases.

We acknowledge that markets are already pricing in a 75 basis point (bp) increase in the federal funds rate for September. However, markets originally priced a 100 bp increase for July that never happened. There is still plenty of time ahead of the September meeting and plenty of economic data scheduled to be released. Thus, as it stands today, we still believe that the Fed will increase the federal funds rate by 50 bps in September and then by another 50 bps in December.