No, we are not going back to the gold standard - Butler Financial, LTD
Skip to content
12 Wishes for the New Year
Learn more

Over the last several months we have answered several questions from clients regarding renewed speculation on the U.S. dollar as well as about other countries in the world potentially moving back to a ‘gold standard,’ as if the gold standard was a sort of panacea that would save us, that is, save the U.S. and/or the global economy, from its current problems.

We have heard stories that countries around the world have been accumulating gold since the 1970s in a process that ‘points to adopting the gold standard’ again. As we navigate the first days of 2023 it means that, if this process was actually true, it has been a very long process, one that has taken more than 50 years and we have nothing to show! If more than 50 years is not enough to go back to the gold standard, then how long does the world needs to get it done? 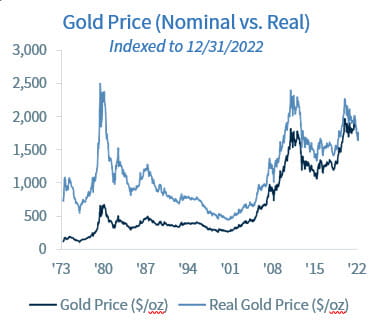 Others argue that going back to a gold standard would bring inflation down. Why? Who said so? Where are is the evidence (i.e., the data) that supports this argument? Have you looked at the historical numbers to conclude that? What prevents inflation from increasing in a gold standard scheme? Every time we see a video of people saying that countries are going to go back to the gold standard our suspicions about somebody wanting to sell gold at any costs increases. Not that gold may not be a good alternative for investors trying to diversify their portfolio, and clients should always contact their advisors to weigh their alternatives, but investing in gold is not a panacea either. Who says that gold prices cannot go down?

The graphs below include three periods of U.S. economic history. The graphs are for the year-over-year consumer price index (CPI), i.e., inflation, and for growth in gross national product (GNP) (we used GNP rather than GDP to keep our analysis consistent across time, but the conclusions are not affected by our choice of variable in this case), that is the rate of growth in the U.S. economy. The three periods are: the period when the gold standard was in effect, which goes from 1890 up to the New Deal in 1933; the second period includes parts of the Great Depression, WWII and the Bretton Woods agreement of a quasi-gold standard; the third period is after the abandonment of the Bretton Woods agreement in 1973 until today, that is, the period of fiat currency. Both graphs include the average inflation rate and/or percentage growth in GNP per year as well as the standard deviation of both the CPI inflation as well as the standard deviation of the growth rate of GDP. We use the standard deviation to measure the volatility of both, inflation as well as GNP. 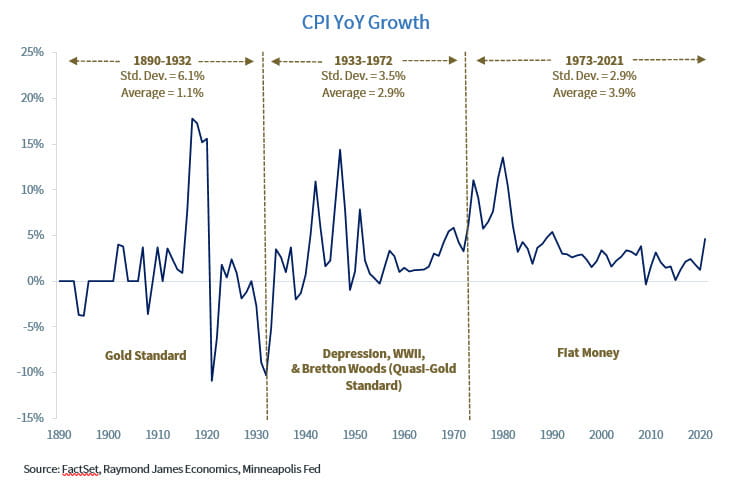 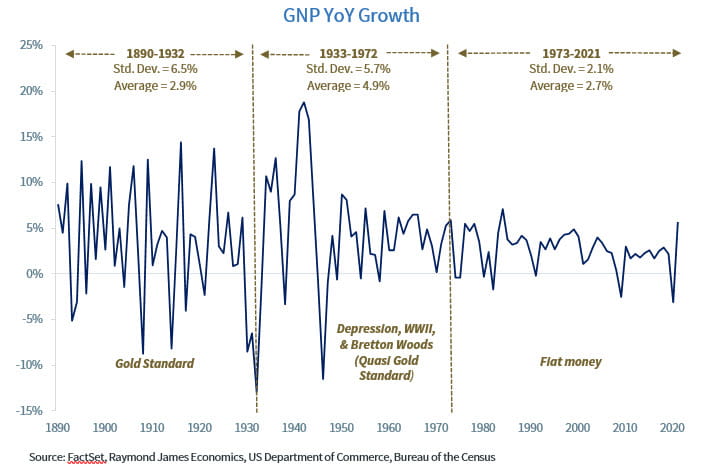 And we did not talk about how many financial crises or banking panics we experienced during the gold standard period (five banking panics) compared to the fiat currency period (two banking panics if we consider the savings and loan crisis of the 1980s as one of them) as the U.S. created the Federal Reserve Bank, the FDIC, the Comptroller of the Currency, and other institutions to stabilize financial markets.

The bottom line is that we don’t believe we are going back to a gold standard. And as history has shown, a gold standard is not a panacea that will solve all our problems, not even the problem many argue it will solve, that is, to bring down inflation.

The employment report surprised on the upside with nonfarm employment posting an increase in jobs of 223,000 during the last month of 2022 while the ISM Services PMI showed the first month of contraction for that Index since May 2020, a complete surprise, as FactSet consensus was expecting it to remain in expansion territory during December.

But even if the data had one for the bulls and one for the bears, it is clear that, overall, the U.S. economy is slowing down, which is what the Federal Reserve (Fed) has been trying to engineer since it started to increase interest rates early in 2022. That is, we believe the Fed is on pace to affect ‘animal spirits’ so as to weaken economic activity so much that inflation is going to continue to slow down.

Thus, we believe that no matter whether the terminal federal funds rate is 5.00% or 5.50% at the end of the current monetary cycle, the U.S. economy is in a clear slowdown trajectory, and this is good news for the Fed, for inflation and for the markets.

Opinions are those of Investment Strategy and not necessarily those of Raymond James and are subject to change without notice. The information has been obtained from sources considered to be reliable, but we do not guarantee that the foregoing material is accurate or complete. There is no assurance any of the trends mentioned will continue or forecasts will occur. Last performance may not be indicative of future results.

Consumer Price Index is a measure of inflation compiled by the U.S. Bureau of Labor Statistics. Currencies investing is generally considered speculative because of the significant potential for investment loss. Their markets are likely to be volatile and there may be sharp price fluctuations even during periods when prices overall are rising.

The Consumer Confidence Index (CCI) is a survey, administered by The Conference Board, that measures how optimistic or pessimistic consumers are regarding their expected financial situation. A value above 100 signals a boost in the consumers’ confidence towards the future economic situation, as a consequence of which they are less prone to save, and more inclined to consume. The opposite applies to values under 100.

FHFA House Price Index: The FHFA House Price Index is the nation’s only collection of public, freely available house price indexes that measure changes in single-family home values based on data from all 50 states and over 400 American cities that extend back to the mid-1970s.

Expectations Index: The Expectations Index is a component of the Consumer Confidence Index® (CCI), which is published each month by the Conference Board. The CCI reflects consumers’ short-term—that is, six- month—outlook for, and sentiment about, the performance of the overall economy as it affects them.

U.S. residents (imports) and sold to foreign buyers (exports). The indexes are updated once a month by the Bureau of Labor Statistics (BLS) International Price Program (IPP).

ISM Production Index: The ISM manufacturing index or PMI measures the change in production levels across the

U.S. economy from month to month.

ISM Services PMI Index: The Institute of Supply Management (ISM) Non-Manufacturing Purchasing Managers’ Index (PMI) (also known as the ISM Services PMI) report on Business, a composite index is calculated as an indicator of the overall economic condition for the non-manufacturing sector.