The euro zone has continually disappointed over the last decade, buffeted by internal discord, sluggish growth and strained diplomatic relations with Russia, the UK and the United States. Whilst certain regional companies remain world leaders, regional stock markets have typically lagged global benchmarks and the end of a sustained policy of negative interest rates by the European Central Bank (ECB) appears further away than ever.

Despite an unpromising backdrop, the pandemic crisis of 2020 has caused a rethinking of previous orthodoxies. Whilst the heavy toll across families and broader populations throughout all western European countries will not be forgotten, the latest economic crisis has led to some surprising reactions, primarily in the area of fiscal policy.

The ECB has been a source of material support for the euro zone economy ever since the previous president Mario Draghi’s ‘whatever it takes’ Damascene conversion. Such willingness to embrace an extended balance sheet has created powerful enemies among economic policy decision makers over the years. While the German Bundesbank maintained a policy of tentative and mild support at best, the country’s Constitutional Court materially upped the ante back in May by calling the ECB’s bond-buying powers into question. 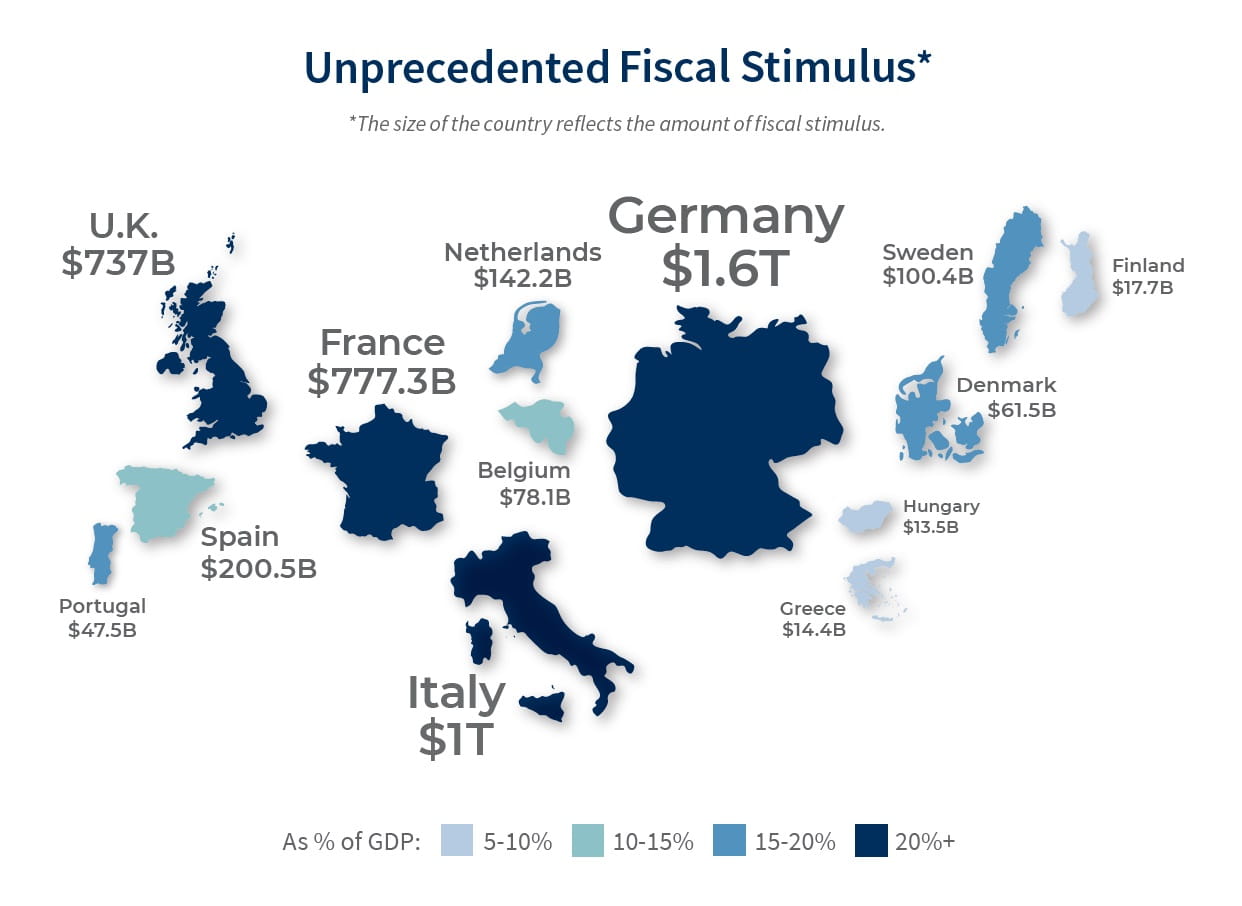 It goes without saying that in a time of pandemic crisis this was extremely unhelpful. However, acute observers would have noted at the time the frustration towards the court espoused by German Chancellor Angela Merkel, whose final years of direct political power have been riven with challenges. Last autumn, my own conclusion was that the impending chancellorship election, due two-thirds of the way through 2021, would induce her own Damascene conversion to a world of legacy enhancing, unbalanced fiscal budgets. That conclusion has proven to be correct, but the mechanism to get there has been very, very different.

Possibly influenced by Merkel’s own scientific background, but certainly backed by an efficient and effective administration, the German pandemic response has impressed many neutral observers. Looking beyond the bald healthcare numbers and statistics, Germany was also most proportionately responsive in areas such as loans and associated financing opportunities for businesses to tide them over the pandemic period. Certainly there is something about a truly exogenous crisis, such as the COVID-19 pandemic, that highlights – even to a country that prides itself on business efficiency and high productivity – that material assis­tance (of an anticipated, temporary nature) is required. Supplement this with the costs of a wage support scheme, and Germany’s very orthodox balanced budget position has shifted, at least until the 2022 budgetary year, to a material deficit position.

Contrary to the instincts of many arch Eurosceptics, the fiscal ‘heavy lifting’ across Europe over the past generation has been undertaken by individual national governments. Akin to the German response, the crisis has produced a slew of national government initiatives to boost budget deficits to levels that would have provoked anger and sanctions at previous crisis points in the region’s history. Reflecting this, European Union restrictions on national budgets that were suspended because of the pandemic will not apply again until 2022 at the earliest. This has allowed many governments – including both France and Italy – to announce supplementary fiscal boosts in the early autumn period.

The severity of the pandemic crisis – back in June and July – cre­ated a further stimulus initiative: a central fiscal lever agreed upon and funded by the central European Council itself, primarily to be used as a supplementary tool to boost the most economically impacted parts of the euro zone. Such a policy capability has been central to all successful single currency integrated economic zones (such as the United States), but has been sadly suppressed due to the challenges of coordinating over twenty member states. Despite some opposition from a group of ‘frugal’ northern European countries (strikingly, though, not Germany), a starter package made up of loans and grants was forged and will be applied over the next couple of years. This may have been of relatively modest size compared to the quantum of various national government fiscal plans, but as a signaling mechanism, it reflects Europe’s continuing growth. It is just a shame that it took such a crisis to open up such a potential policy shift.

For allocators whose default position has been to underweight both the region’s financial markets and the euro, these measures over time may induce a reassessment. As Albert Einstein once noted, “in the midst of every crisis, lies great opportunity.”

*Chris Bailey is an affiliate of Raymond James & Associates, Inc., and Raymond James Financial Services, Inc. All expressions of opinion reflect the judgment of the author and are subject to change.