The U.S. economy is weak, as GDP numbers in both the second quarter and the third quarter have shown. The fundamental reason why the U.S. economy grew 2.6% during the third quarter of the year was because Net Exports, which is exports of goods and services less imports of goods and services, contributed 2.77 percentage points to economic growth during the quarter. Export growth was very strong, up 14.4%, while imports declined by 6.9%. This means that the U.S. sold a lot of goods and services to the rest of the world as it imported fewer goods from the rest of the world. Thus, all those firms/industries that cater to consumers around the world had a very good quarter, especially considering the strength in the U.S. dollar during this year. But most importantly, the reason why the U.S. economy was strong during the third quarter of the year wasn’t because of the domestic sectors, but just because the rest of the world imported lots of goods from the U.S.

In fact, personal consumption expenditures (PCE) increased 1.4% during the third quarter of the year after inching up by 2.0% during the second quarter. The consumption of goods was still strong and above pre – pandemic trend, but it has continued to slow down during the year. However, the service sector continued to recover from the severe downturn created by the COVID-19 pandemic. 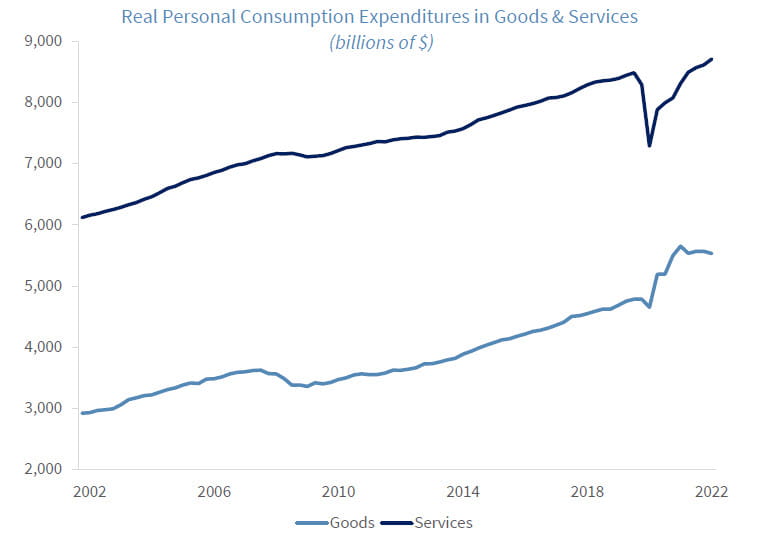 As U.S. Federal Reserve (Fed) officials get ready for another Federal Open Market Committee (FOMC) meeting in early November, the U.S. economy seems to have avoided, for now, the worst consequences of the large increase in rates in such a short period of time. Perhaps the only exception has been the notable weakening of the U.S. housing market, which has followed an orderly slowdown process – very different from what happened in previous interest rate increase episodes. In fact, some sectors/regions of the U.S. housing market still show strong resilience to the surge in mortgage rates.

The U.S. service sector has continued to expand, bolstered by the complete reopening of the U.S. economy after two years of COVID restrictions, the still-strong growth in jobs as well as the high job openings compared to the availability of workers, as well as the fact that many Americans still have money left from the accumulation of savings that occurred during the pandemic. In fact, new research by the Federal Reserve estimates that “households in the bottom half of the income distribution still held roughly $350 billion in excess savings – about $5,500 per household on average.” Furthermore, the Fed also estimates that the stock of excess savings was still about $1.7 trillion by mid-2022. The research also showed “the primary driver of the excess savings for households in the top quartile has been their foregone consumption, whereas the primary driver of excess savings for the bottom half of the income distribution was the roughly $1.5 trillion in fiscal transfers received through the end of 2021.” 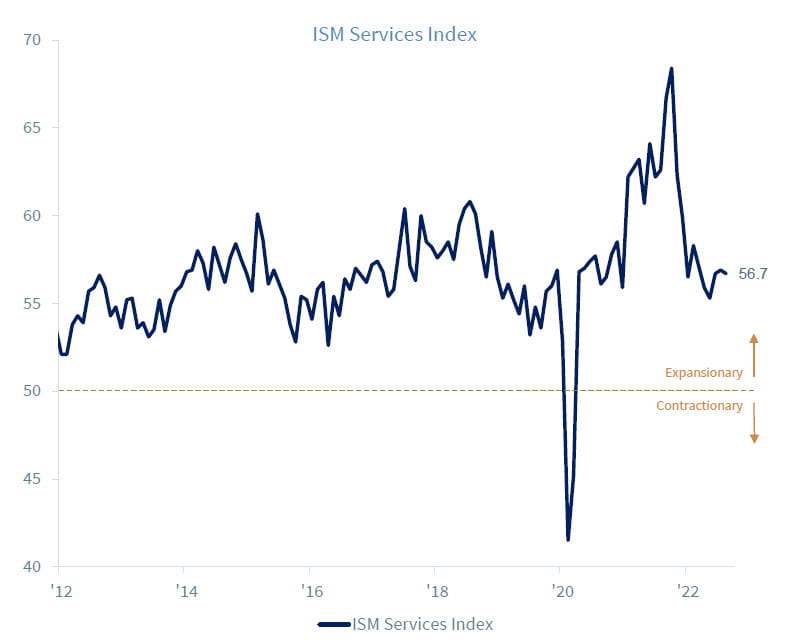 This strength has been heralded by the increase in jobs in the service sector as well as by the resiliency of U.S. consumers, even in the face of very strong headwinds in terms of higher rates of inflation. Just to give an example, employment in the goods producing sector have declined by roughly 1.7 million since the early part of the 2000s while all the growth in employment has occurred in the U.S. service sector, which has seen an increase in employment of almost 22.8 million during the same period. 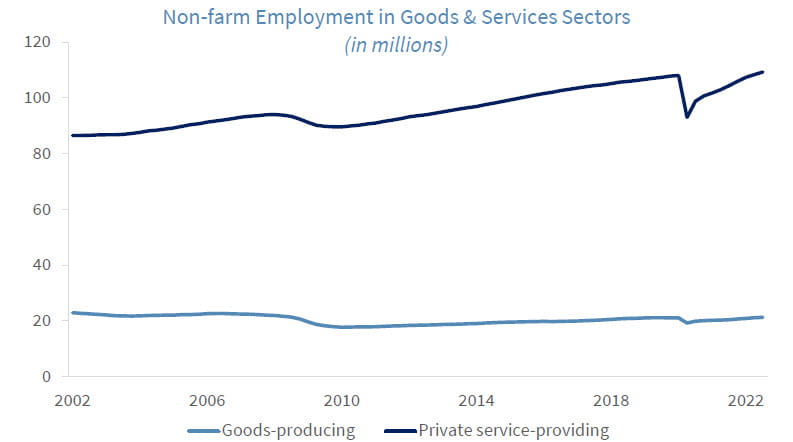 As we said before, the U.S. economy is already weak and continues to weaken. This means that the Fed should seriously consider stopping its interest increase campaign in December of this year. It is clear that almost all the growth is coming from outside of the U.S. as exports continue to defy the strength of the U.S. dollar and as the U.S. exports energy products to Europe.

Since the U.S. is mostly exporting goods and the goods sector is not driving job growth, the Fed cannot use the strength in the third quarter to argue for higher interest rates past December of this year.

Furthermore, and perhaps the best news during the third quarter release, was the evolution of prices during the quarter, which underscores the diminished inflationary pressures coming from the goods sector of the economy. The price index for goods increased at a seasonally adjusted annual rate of “only” 2.8% during the third quarter of the year, down from an increase of 10.6% during the second quarter and a rate of 12.6% during the first quarter. This means that the weakness in goods consumption over the last several quarters is already affecting the pricing power of firms, which should accelerate during the rest of the year and be great news for the Fed.

All of this means that the Fed should be patient because the slowdown in economic activity is having the desired effects on U.S. inflation: It is coming down!