Don’t Hold Your Breath for the Return of Double-Digit Rates - Butler Financial, LTD
Skip to content
How will midterm elections impact the market? - October 28, 2022
Learn more

What sustained low interest rates could mean for the economy and your wallet.

Today’s extraordinarily low interest rates have created a window of opportunity, as consumers and companies take advantage of cheap borrowing costs and homeowners rush to shave money off their mortgage by refinancing.

But there are two sides to every coin: This trend makes it that much tougher for savers looking to earn enough interest on their cash reserves to stay ahead of inflation. Right now, spending is the priority for pandemic crisis recovery, and so the Federal Reserve has announced it plans to keep interest rates near zero until at least 2023.

With Americans’ personal savings rates at historic highs, there comes an urge to “do something” with idle money – or to reconsider the ratio of stocks to bonds in a portfolio, given the muted prospects for fixed income. Here we offer a dose of perspective on navigating this environment.

The echo of “lower for longer”

In the U.S., the central bankers at the Federal Reserve have control over what’s called short-term interest rates, the rate banks charge one another to borrow money for a day. In general, every other interest rate is affected by what the fed funds rate is, from the return on your savings account to the rates charged on a mortgage. Cut that rate and it’s less expensive to borrow money. Raise the rate, it becomes more costly to borrow, and people will tend to save more. It’s one tool the Fed uses to pursue its goals.

“The Fed has two goals, maximum employment and stable prices – and by stable prices we mean inflation around 2%,” said Scott Brown, Raymond James chief economist. After a series of listening sessions across the U.S., the Fed announced in August that it would now try to achieve inflation that averages 2% – meaning that if there is a period well below the target 2%, you need to run above 2% to balance that. “This suggests a somewhat higher tolerance for inflation, somewhat higher tolerance for low unemployment as well,” said Brown. “Putting it in the statement was sort of banging the gong.”

All of that points to low interest rates sticking around. In fact, interest rates have been trending downward for decades (as illustrated in the chart below). 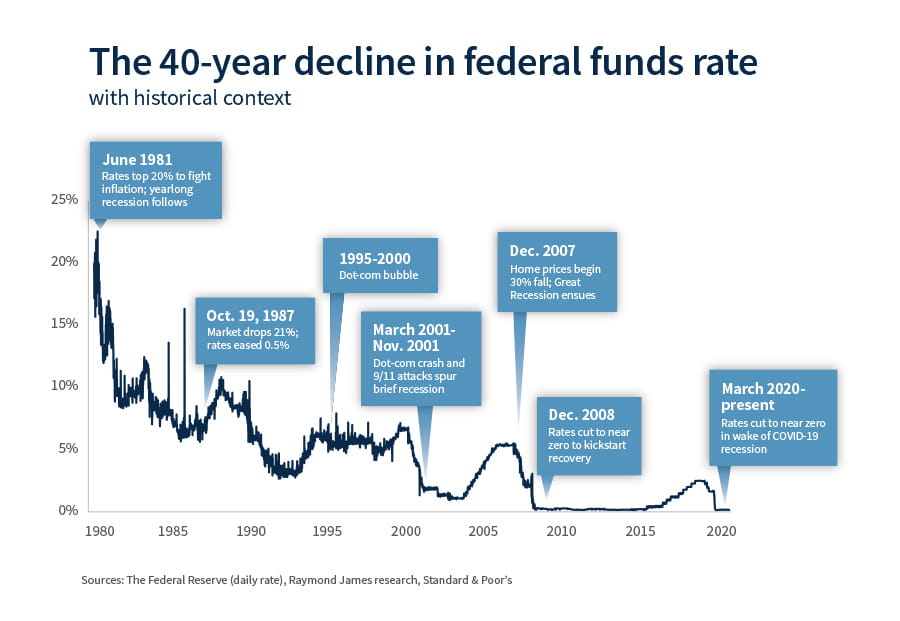 Forget the high rates of the ’80s

Professionals say that means you shouldn’t hold your breath waiting for the higher rates seen 40 years ago. Back then, the Fed pumped the brakes with double-digit interest rates to combat inflation that was smothering the economy. The 10-year Treasury yield, for example, peaked at 16% in 1981.

“I don’t think it’s very likely that investors are going to see double-digit interest rates again,” Brown said. That’s in part because the Fed learned to avoid the destabilizing “go-stop” monetary policy that convinced businesses to maintain high prices during that period. “The Fed has become a well-organized machine over the last several years, with a very solid underpinning in terms of the economists working there. So as long as we see inflation expectations remaining low, those tend to be self-fulfilling.”

This change in the landscape may require a shift in your strategy for emergency cash and investments. The traditional advice for investors is that as you get closer to a goal like retirement, you should trade stock holdings for lower risk investments such as bonds. “But no one’s really earning a lot in fixed income, so that’s a bit of an issue,” Brown said. “That means you’ll want to talk to your financial advisor because you can generate income aside from just buying a Treasury bond.”

Investment professionals also say to focus on the role of fixed income as a shock absorber in your portfolio, which comes in handy in times of turbulence. “In the year ahead, we expect bonds to offset the potential for equity volatility rather than produce robust capital appreciation returns,” said Raymond James Chief Investment Officer Larry Adam. There’s something to be said for principal preservation – the return of your money rather than the return on your money.

If you’re worried that you’re not doing enough with your nest egg with rates lower for longer, talk to your advisor. They can help you explore strategies for your cash and investments that align with your risk tolerance and timeline.

All expressions of opinion reflect the judgment of the Chief Investment Office and are subject to change. This information should not be construed as a recommendation. The foregoing content is subject to change at any time without notice. Content provided herein is for informational purposes only. There is no guarantee that these statements, opinions or forecasts provided herein will prove to be correct.