When it comes to investors’ decisions about the market, the election is just one factor among many.

Every four years, the U.S. presidential election brings uncertainty – something the human mind, and markets, tends to dislike. But if you’re concerned that the markets will dive or thrive based solely on who is in the oval office, historic trends show that anxiety is unfounded. Through the last century, the long-term performance of the markets has revealed little correlation with government policies, according to an analysis by Raymond James Equity Research.

In 17 of the past 23 election years, the S&P 500 index has ended in positive territory. When the index ends an election year below its preceding January 1 level, it’s usually because of larger forces at play. Examples include the dot-com bust of 2000 and the 2008 financial crisis. Because of this, investors would be wise to think long term. Consider that over the past 75 years, through Democratic and Republican administrations, the S&P 500 has had an average annual return of about 11%, historical records show.

Myth #2: One party can lay claim to superior economic or financial market performance.

A look at past presidential terms shows that markets (as illustrated by the 11% average annual return of the S&P 500 over the past seven decades) and gross domestic product (GDP) are apolitical and have performed well under both major parties.

The growth rate of GDP, one of the most popular indicators of overall economic health in the U.S., has averaged 3% per year from 1948 until present day, according to a Raymond James Investment Strategy analysis. Real GDP decreased 5% on an annualized basis in the first quarter of 2020, and fell a record 32.9% annualized rate in the second quarter due to the COVID-19 crisis. Putting these past two quarters aside, one of the most striking features of the U.S. economy in modern times is its sustained growth over time. 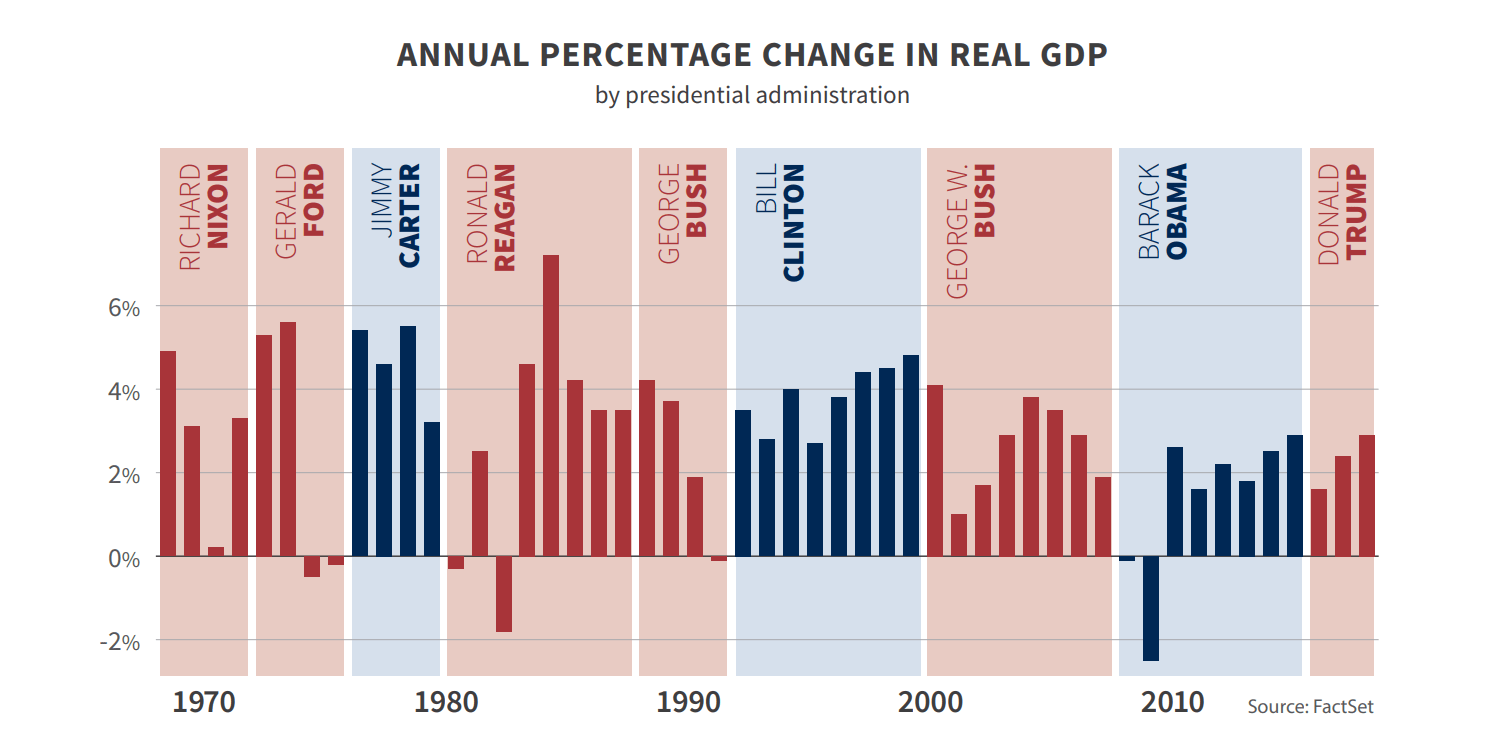 In addition to the pattern of apolitical growth, there is the fact that the U.S. president has only indirect influence over the economy – by design. This is in part because of the separation of powers outlined in the Constitution. Though the executive branch does wield a great deal of power, the checks and balances of American government mean that the credit – and blame – cannot be neatly traced back to a single leader or party.

One must also consider the power of the U.S. Federal Reserve (the Fed), the nation’s central bank. The president doesn’t control monetary policy or interest rates, but the Fed does. It can lower interest rates to encourage borrowing or raise rates to curtail inflation. The Fed usually is averse to changing rates in election years, but it will continue to monitor and respond to the state of the economy regardless.

While there are limits to a president or party’s influence over the economy or the markets, historically, the three months leading up to the presidential election for the equity market has predicted the eventual winner. The S&P 500 trending upward correlates with an incumbent president (or the president’s party) performing well at the polls. The reverse is also true.

Myth #3: U.S. stock markets are weakest in the year after the election of a new president.

This is also known as the Presidential Election Cycle Theory, put forth by Stock Trader’s Almanac founder Yale Hirsch. While it’s more a theory than a myth, it’s worth noting because it tends to be cited during an election year as a way for investors to “time the market.”

According to the theory, the first two years of a presidential term tend to produce below-average returns, while the last two years are well above-average. Theorists say this is because presidents often focus on bolstering the economy late in their term to boost their chances of re-election, or in the case of a second-term president, boost their party’s chances of maintaining control of the White House.

While the data shows a correlation between the election cycle itself and market performance, that doesn’t mean there is causation. Another issue is that many analysts argue the sample size isn’t large enough to draw a definitive conclusion.

Volatility is a reality

There is often a bit of turbulence as Election Day draws nearer, and considering the twists and turns of 2020 so far, volatility may be higher. The fallout from the COVID-19 pandemic, U.S.-China trade negotiations, U.S.-Iran geopolitical tensions and social unrest are just a few of the events influencing the current environment.

The bottom line is that market volatility is likely to increase surrounding the election no matter which political party wins, with growth anticipated over the long term – again no matter which political party is in power. Investors would be prudent to avoid hasty investment decisions based on an election outcome alone. Looking at historical data, staying the course has been the soundest approach.

All expressions of opinion reflect the judgment of Raymond James & Associates, Inc. and are subject to change. There is no assurance any of the trends mentioned will continue or that any of the forecasts mentioned will occur. Economic and market conditions are subject to change. Investing involves risk including the possible loss of capital. The S&P 500 is an unmanaged index of 500 widely held stocks. It is not possible to invest directly in an index. The market performance noted does not include fees and charges which would affect an investor’s returns. Past performance may not be indicative of future results.