The deal could open the door for new companies, better coverage and 5G growth.

The federal government and a federal judge both recently approved a blockbuster merger between wireless service providers T-Mobile and Sprint, turning the two smallest “big four” nationwide providers into one stronger player to rival industry giants Verizon and AT&T. The new company’s approximately 110 million customers will make it the third largest service provider and not far behind second place.

T-Mobile is moving forward to close its purchase of Sprint, with approval by the California Public Utility Commission the last major hurdle. 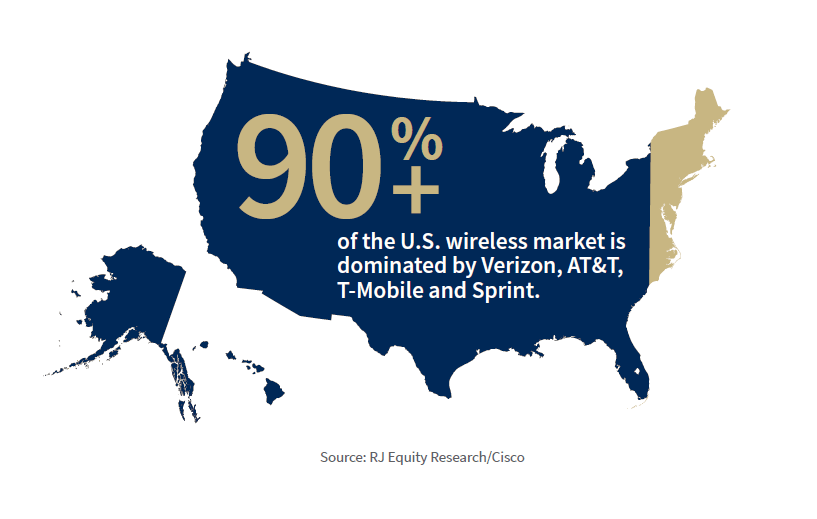 This logical merger has a less obvious and unconventional rationale, according to Frank Louthan, telecommunications services analyst. In addition to creating a credible third competitor, the Department of Justice also wanted a fourth provider to emerge and further strengthen the marketplace. Enter Dish Network, a name familiar to millions of TV subscribers, which will build a new fourth network to ensure competition and consumer choice.

The merger will also affect nationwide coverage, which, according to Ric Prentiss, global head of telecommunications services research, remains the determining factor for most consumers when choosing a provider. When considering your options, it generally comes down to “who has the best network where you live, where you work and where you play,” says Prentiss. “It makes no sense to try and save money if your phone doesn’t work.”

Accordingly, the new T-Mobile/Sprint company has committed to improve coverage for all consumers, especially those in rural communities, where Verizon has historically had the strongest national network and coverage. That may make a notable difference for many consumers, as Prentiss notes that the U.S. is particularly difficult to cover due to its sprawling metropolises and suburbs: “Consumers want that coverage to make sure their phones work everywhere.”

The merger creates a highly competitive company with the largest current 5G network in the U.S. The combination of wireless and video with newer uses like augmented reality and gaming require faster speeds and stronger connections for devices than with the previous four generations of cellular network technology. Experts believe that a united, stronger company is necessary to drive competition and ensure 5G access to a broader base of consumers in the coming years. Learn more about the 5G future.

Building out an expansive 5G network across the U.S. for cell phones and other devices will undoubtedly be an expensive venture for all providers. But will consumers see their monthly phone bills rise?

Probably not right off the bat. As a condition of the merger, T-Mobile and Sprint pledged to not raise prices for three years. Verizon and AT&T are not obligated to hold prices steady, but Verizon has history to help inform its decisions – when it first started rolling out 5G in early 2019 to a handful of markets, Verizon increased prices by $10, but soon discovered it wasn’t a good idea to charge for a service that in its early stages was inconsistent.

5G is expected to usher in new breeds of companies that leverage this next generation of speed and technology. One idea to keep costs manageable for consumers while ensuring broad access to consistently high speeds for all parties is for these new companies to chip in for the cost of 5G convenience.

The addition and subtraction of wireless service providers will impact much of the American population and the devices that power our lives. A more competitive marketplace paired with a new and faster era of technology could be only the beginning.