It's all about inflation - Butler Financial, LTD
Skip to content
Navigating a sea of negativity - June 21, 2022
Learn more

Today’s consumer price index report was not a good one for Americans, for the stock market, and for the Federal Reserve (Fed). This report will increase the pressure on the Fed to do what is needed to bring inflation down at (any?) cost. However, the increase in the consumer price index (CPI) on a year-over- year basis was also accompanied by a decline in the year-over-year number for the core CPI number, that is, the number that excludes items like food and energy, which are very volatile. The core CPI number is the one that the Fed looks at closely to gauge what is happening to overall inflation and that number was just a bit better than in April.

Others argued that our rate of inflation was too low for comfort, approaching zero or even negative rates, i.e., deflation, during some periods. In fact, monetary policy over the last several decades had to be retooled for the new normal of very low inflation and very low interest rates with what has been called the ‘zero-lower-bound.’ As ex-chairman of the Federal Reserve Ben Bernanke indicated in a 2017 Brookings Institution article “…the scope for rate cuts is limited by the fact that interest rates cannot fall (much) below zero, as people always have the option of holding cash, which pays zero interest, rather than negative-yielding assets. When short-term interest rates reach zero, further monetary easing becomes difficult and may require unconventional monetary policy, such as large-scale asset purchases (quantitative easing).”

We have also heard a lot about stagflation lately. We even heard a presumed ‘expert investor’ saying that we are in a ‘hyperinflationary’ scenario, something that is ludicrous. Talking about hyperinflation makes no sense, not only because inflation today is ‘just’ 8% but also because hyperinflation is a very particular event and the conditions for it to become a reality are such that it is almost impossible for it to happen in the US.

On this call we politely disagree with the ex-Chairman of the Federal Reserve, Ben Bernanke, who has been doing the ‘new book’ selling round and has been saying that a stagflation environment is possible. For stagflation to be an alternative, inflation needs to become entrenched.

That is, future or long-term inflationary expectations need to become unanchored. And this is not happening today. We are not saying that this may not happen in the future, but it is not true today. What we are saying is that under current conditions, stagflation is not a feasible outcome today. 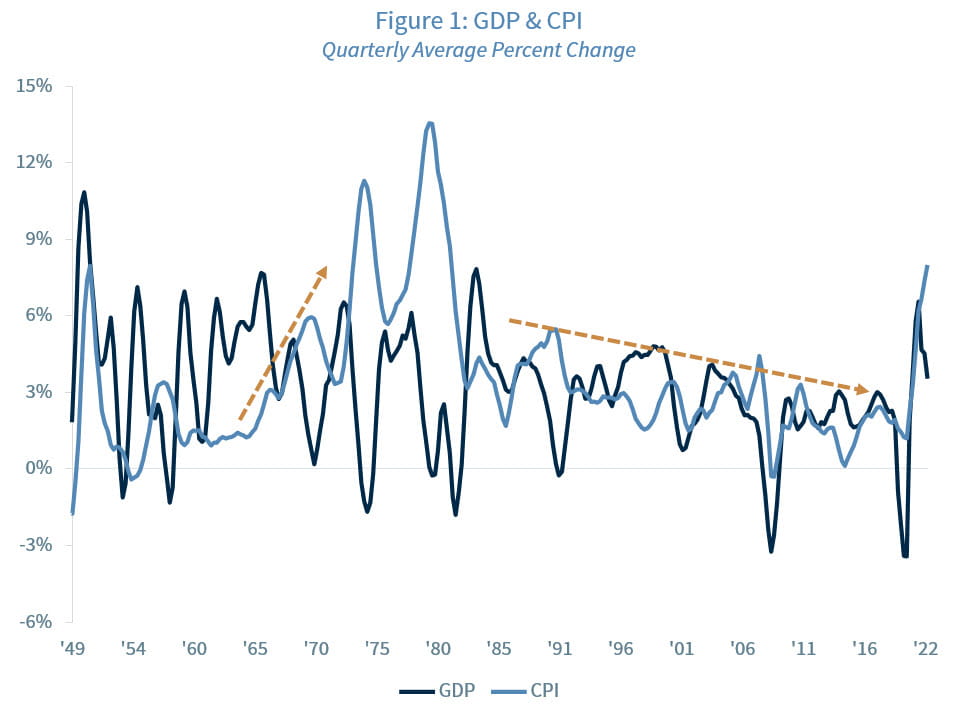 And, by the way, you noticed that I have not even talked about the Ukraine/Russia war and the price of food, petroleum, and gasoline, etc., yet. But yes, these issues have added to uncertainty and to the upward pressure on prices. This is clear from looking at what is happening in the rest of the world. Even Japan is experiencing accelerating inflation. The Bank of Japan has been trying to get inflation higher since the 1990s to no avail and this war has given them a triumph they seem to be trying to disown! 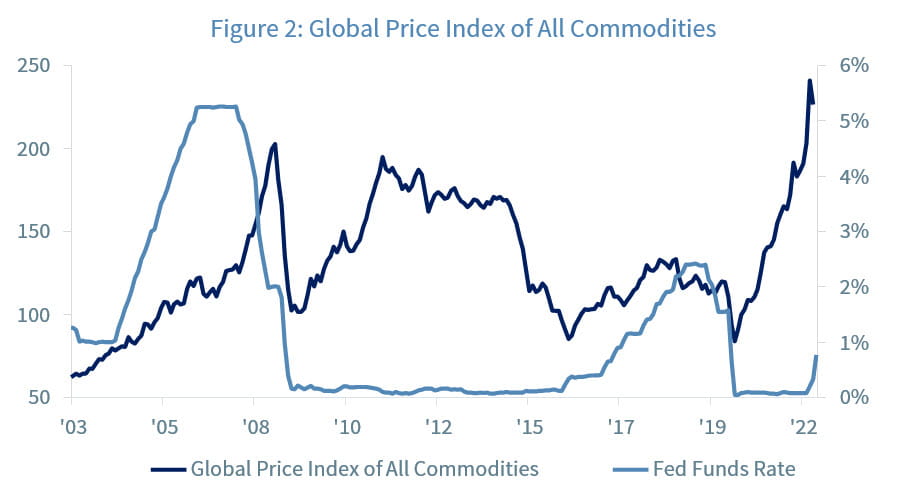 The graph above shows the evolution of commodity prices over the years, and we can see that the current increase in commodity prices is not related to US monetary policy but to overall world supply-demand imbalances, something neither the US Federal Reserve nor the US political administration has control over. Of course, we could argue that if the central banks of the world increase interest rates at the same time and to very high levels they could generate a global recession. Then, global commodity prices would certainly come down to earth. But such an event requires conditions that are even more difficult to attain than the conditions needed for the US economy to enter into stagflation.

read more
ButlerFinancial
See the forest through the trees