When a country decides on the characteristic of its exchange rate regime (or exchange rate policy), it is deciding on the variable that will be in charge of adjusting the impact of shocks. This includes unforeseen shocks (i.e., external shocks) as well as shocks created by its own policy decisions. The latter has been exemplified by the UK government’s latest policy decision to lower tax rates, which sent the pound plunging and yields on UK government bonds, gilts, surging.

Typically, low-interest rate policies like the one the US followed during the previous 20 years or so, tend to weaken the currency of a country. Recall that many countries, including Brazil, complained against the US’ low-interest rate policy because, they said, it was weakening the US dollar relative to the Brazilian real and making it harder for Brazilian exports to compete against US exports in foreign markets.

Domestic policies affect the country’s exchange rate and thus affect other countries of the world through their effect on trade as well as through financial transmission mechanisms.

After World War II the largest countries in the world got together at Bretton Woods and decided on a common exchange rate policy system to avoid competitive devaluations that could send countries into what economies call ‘beggar-thy-neighbor’ policies by which a country pursues policies to address its own internal issues but by doing so it creates issues in other countries.

Trade protection using tariffs is one such ‘beggar-thy-neighbor’ policies that is intended to fix a particular issue in one country but that negatively affects other countries through its effects on trade.

Today, the US government doesn’t have a strong dollar policy, as was the case during the Clinton administration under Treasury Secretary Robert Rubin. Today’s problem is high inflation and high inflation typically requires high(er) interest rates, which is what the Federal Reserve (Fed) is doing today. The fact that the Fed has taken the lead across the world to raise interest rates higher and faster than other central banks has produced a strong dollar policy as a byproduct, but the reason is that other central banks have been late to the game (even later than the Fed) in rising interest rates. But then again, inflation in the US is ‘just 8.3%’ today and trending downward while some are expecting inflation of almost 20% in the UK next year even before the episodes of the last week because of the effects of keeping interest rates so low while facing such high rates of inflation.

No, it is not. But neither is a weak dollar policy intrinsically bad. As we said in the title of todays’ Weekly Economics, a freely floating exchange rate (which is the exchange regime the US has) since the abandonment of the Bretton Woods agreement in the 1970’s during the Nixon administration, acts as a shock absorber for the overall economy.

Domestic policies are reflected in the value of the dollar relative to other currencies of the world. During low interest rate periods the expectation is for the US dollar to weaken. However, interest rate policies are not the only policies affecting the value of the dollar. The strength/weakness of the US economy, the level of risk associated with holding other countries’ currencies versus the US dollar, the differential in the rate of inflation between the US and other countries, etc., are some of the factors that affect the value of currencies.

What About the Exchange Rate and Inflation?

One of the benefits of having a strong exchange rate today, i.e., a strong US dollar, is that we can reduce the effects of rising prices on the US economy because it is cheaper for us to import goods from the rest of the world and the US is a very large importing nation. The countries that experience depreciation of their currencies face the opposite effect, whereby the cost of their imports increase considerably, adding to inflationary pressures.

If we look at rates of inflation for the producer price index in the US, Germany, and the euro zone, the differences in inflation rate are impressive, especially since the US dollar started appreciating compared to the euro. 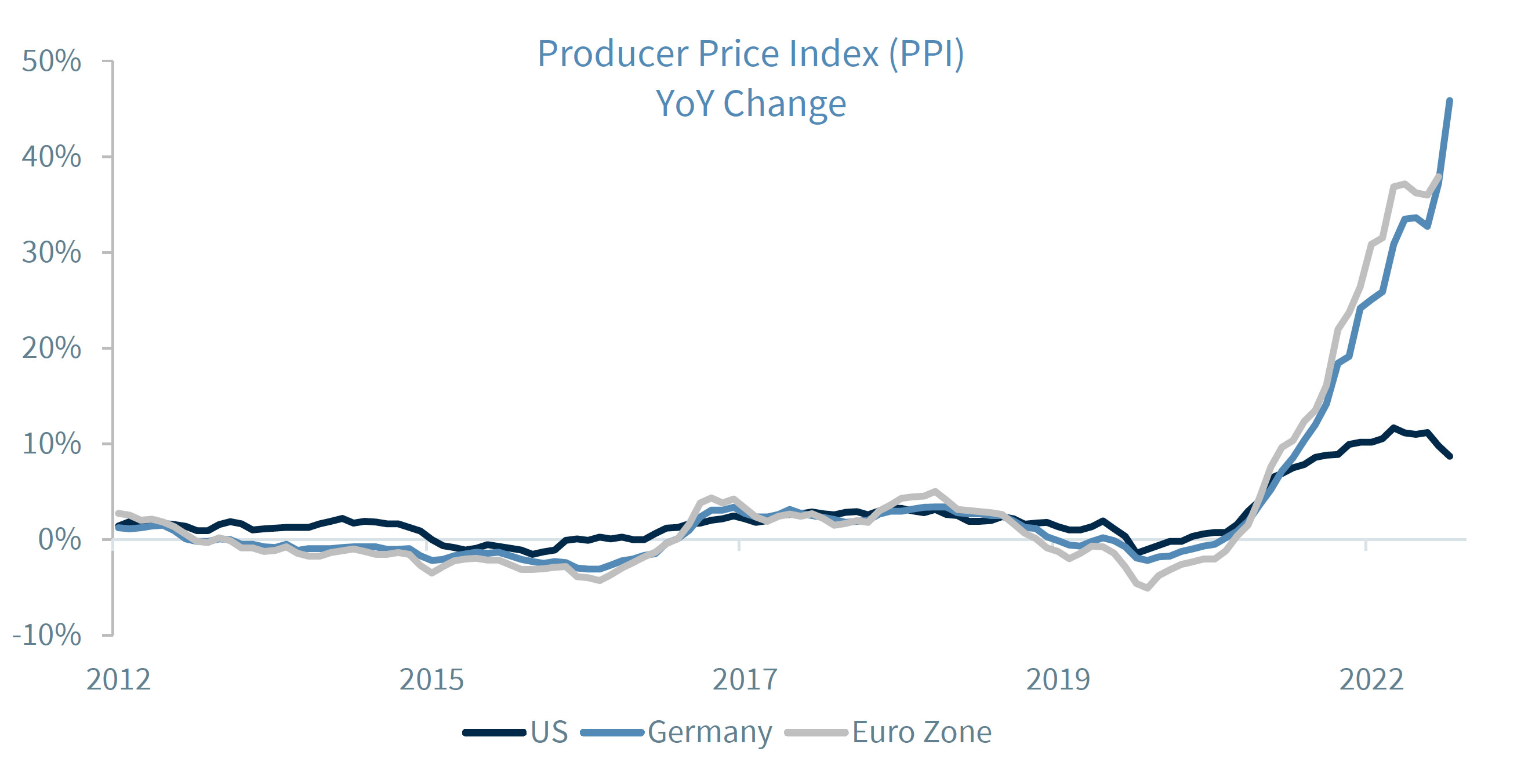 This means that the job of the Fed has become easier with a stronger US dollar than it otherwise would have been with a weaker US dollar because inflation would be much higher than what it is today. Interest rates would probably have to be much higher, and the expected recession would have to be deeper if US monetary policymakers had to deal with the rates of inflation at the producer level that European central bankers are dealing with today.

Of course, the Europeans have had to deal with the added effects that the Russian-Ukraine conflict has brought to them due to their energy dependence on Russian natural gas exports to the region, which have put more pressure on prices starting earlier this year.

What is the Impact on Company’s Earnings?

A strong dollar can have a significant impact on companies’ earnings, as more than 40% of revenues of S&P

500 companies come from overseas. These profits are converted from foreign currencies earnings, especially if they are not used to hedge against foreign exchange risks, to US dollars, and a stronger US dollar translates these earnings into fewer revenues in local currency and ultimately into lower profitability. Additionally, foreign portfolio investors must pay more in their domestic currency for investing in the already expensive US equity market.

On the other hand, while Europe is being negatively impacted by a stronger dollar, European companies are experiencing some benefits from a stronger dollar, as their ~20% of overseas earnings coming from the US are worth more than they were before. 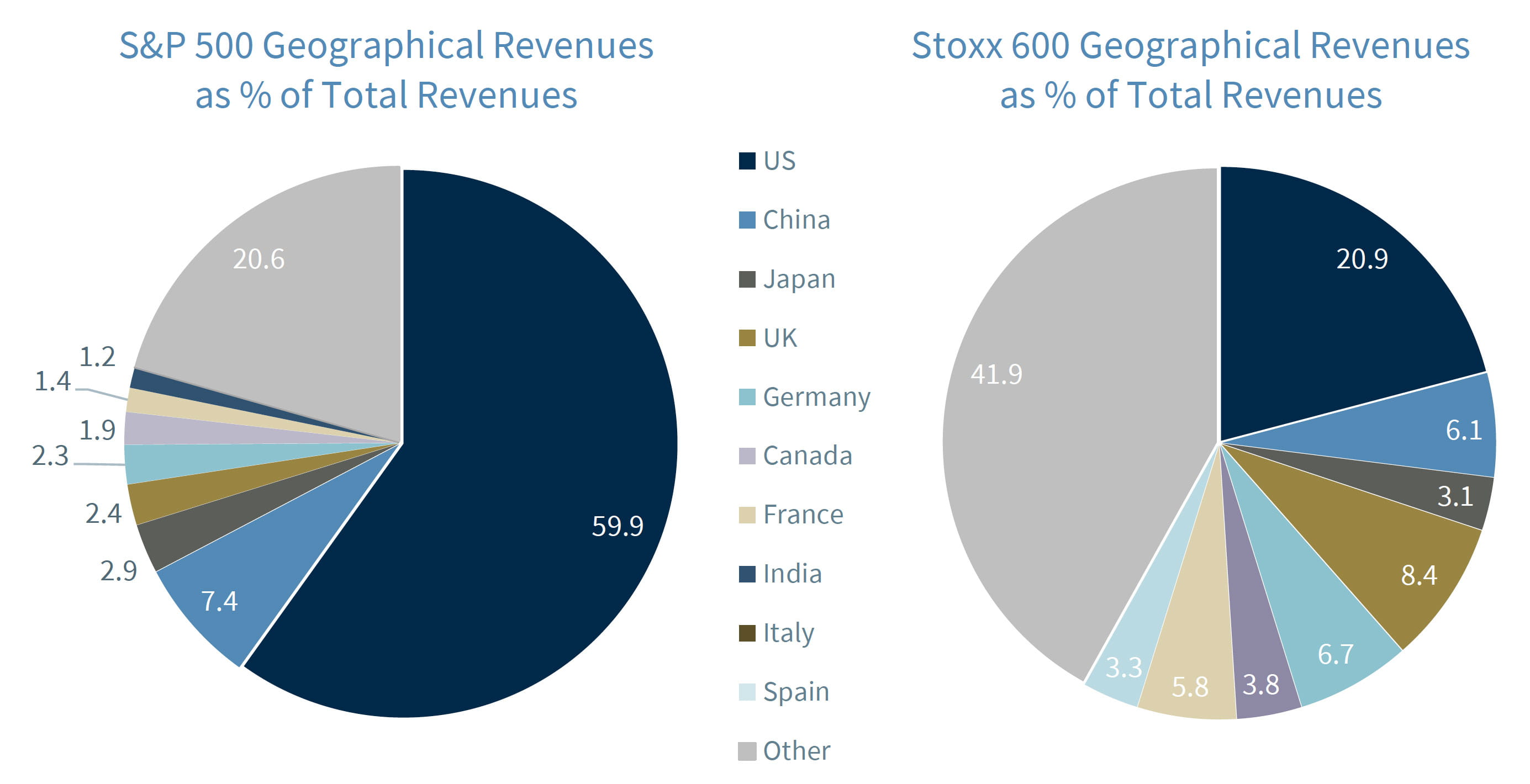 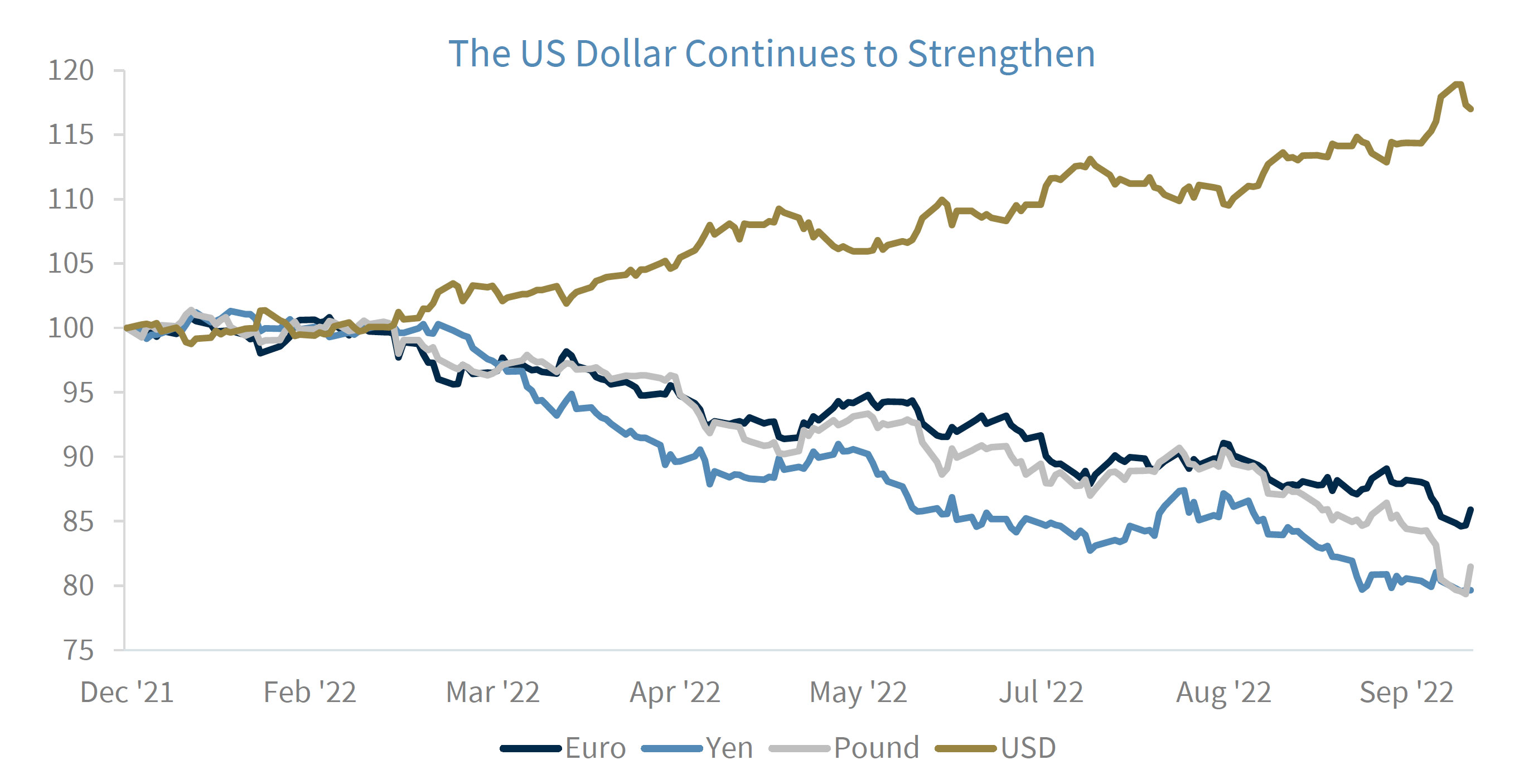 Taking into consideration that the US dollar has continued to appreciate, and we expect it to remain strong at least in the near term, these currency-related impacts on company earnings are likely to continue. Therefore, companies with high exposure to overseas revenues could experience additional impacts from the continued strength of the dollar during the upcoming third quarter earnings season.

From a fixed income perspective, the stronger currency helps on the inflation front domestically as we benefit from cheaper imports. Therefore, a stronger dollar should constrain inflation, and if inflation falls, yields should follow. While US bonds might seem unattractive from an exchange rate perspective, some foreign investors might still be willing to convert their currencies to access a more stable reserve currency and significantly higher yields.